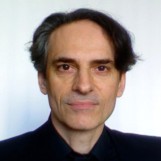 Born in Cannes, France. Fabrice composes music since the age of fifteen. First attracted to Classical and progressive Music he became involved in modern Jazz and later on, in Computer and Electronic music. Studied electronic Music in London were he obtained a degree and a Masters degree in Sonic Arts. Since 1999 became interested in generative music and algorithmic composition and became involved in the Live Coding movement, which is the Art of writing Music Computer code in real-time, while the Music is being performed. He has integrated in his works classical, jazz and electronic music. Using the audio programming language SuperCollider he has written many applications to assist him in composing his music and for Sound Design. He has worked since 2000 as a lecturer in Music Technology in London, UK. He has participated many media projects and has written some software for Sound Therapy. A full-time Music Composer and producer since 2009, he specialises in music for film and television.